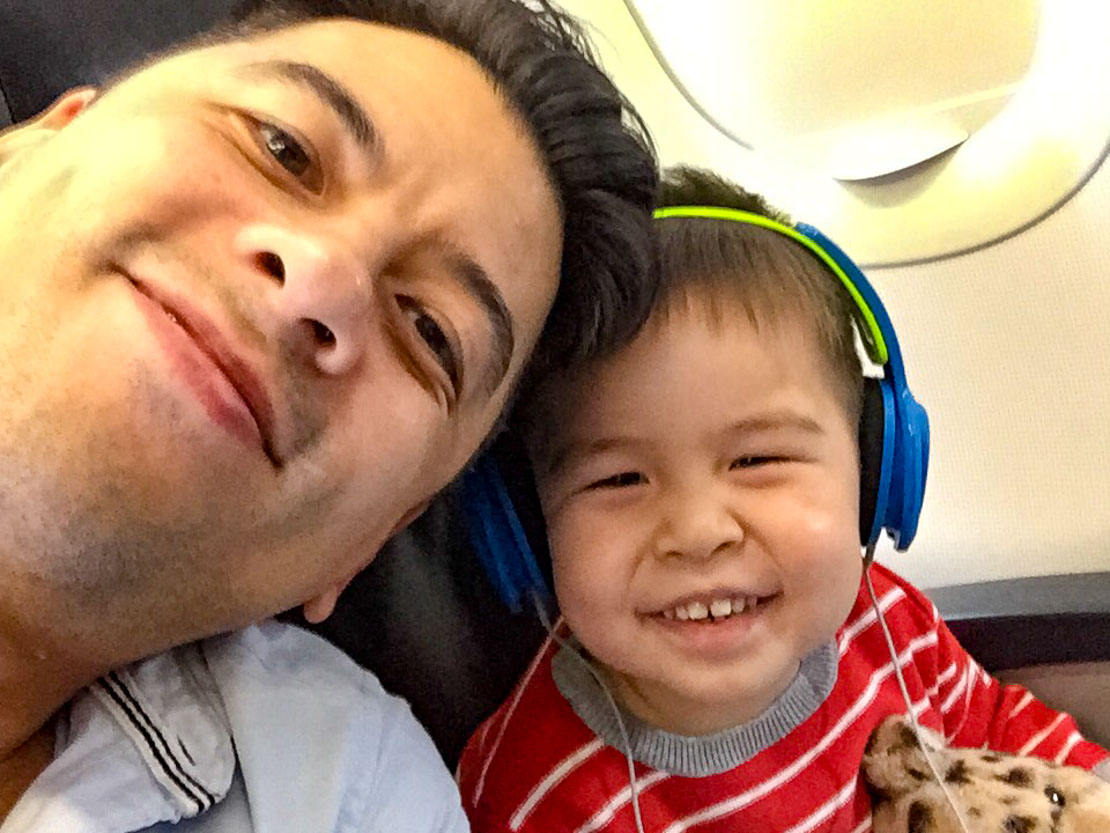 Last summer, I took both kids back to France (then 3 years old and 15 months) but luckily it went relatively well. Preparation was key and here are a few things I learned in the last few years:

We always take a night flight back to France with a stopover at the end of the trip (Amsterdam when going back to France, Singapore when coming back) to make sure they sleep during the longest flight. I avoid taking Middle Eastern airlines because the stopover would be in the middle (the kids would sleep a few hours, would have to wake up in the middle, be dragged through the airport and have trouble getting back to sleep on the second flight).

When we take the plane, Elliott has unlimited access to Ipad and screens. I download new Apps and cartoons to keep him entertained and bring his earphones (the ones on the plane are too big for his head). He usually watches until he is tired and sleeps the rest of the time. Easy.

Even if you booked an infant ticket, the airline will NOT automatically assign the baby bassinet so call their hotline to make sure you will have it.

Emma had already outgrown it when we traveled (different airlines have different sizes) but I still wanted it because it guarantees that I will have the front row seat (= more legroom) and I use the bassinet to store things, sit Emma for meals…

I haven’t tried this yet but plan to buy 2 of them for our next return home. My friends swear by it.

For those traveling with a child under 2 and planning to buy an extra seat, you might reconsider and book a premium economy/business ticket instead.

I once traveled with Elliott (then under 2) while pregnant with Emma so decided to buy an extra seat for him. In retrospect, that wasn’t a good idea because he still wanted to sleep on me, and I still had to carry him during take-off and landing and through times of turbulence. He hardly used his own seat. I wish I had taken a larger seat instead.

Most companies nowadays give priority access to families traveling with young children at check-in and boarding. If not the case, ask the staff if you may have priority. Don’t feel bad when you do, you’re doing this for you but you’re doing it for everyone else on that plane  too.

Unless you have big hand luggage you need to place in the overhead compartment, board on the plane last. The less time strapped on the plane, the better.

If the airline allows it, take your stroller until the last minute (usually the gate of the plane) as there will be a lot of walking between the moment you enter the airport to getting to the plane.

Not all strollers can be taken to the gate and bigger ones have to be sent away together with your luggage. Get in touch with your airline to check if your stroller will be allowed after check-in.

This is why (among other reasons) we have this stroller, which can be folded and placed in the overhead compartment of the plane.

I also take a baby carrier (if I travel alone with two kids then only baby carrier). Remember you wont have your stroller immediately upon landing on the other side and will have to walk quite a bit to get to the luggage belt. 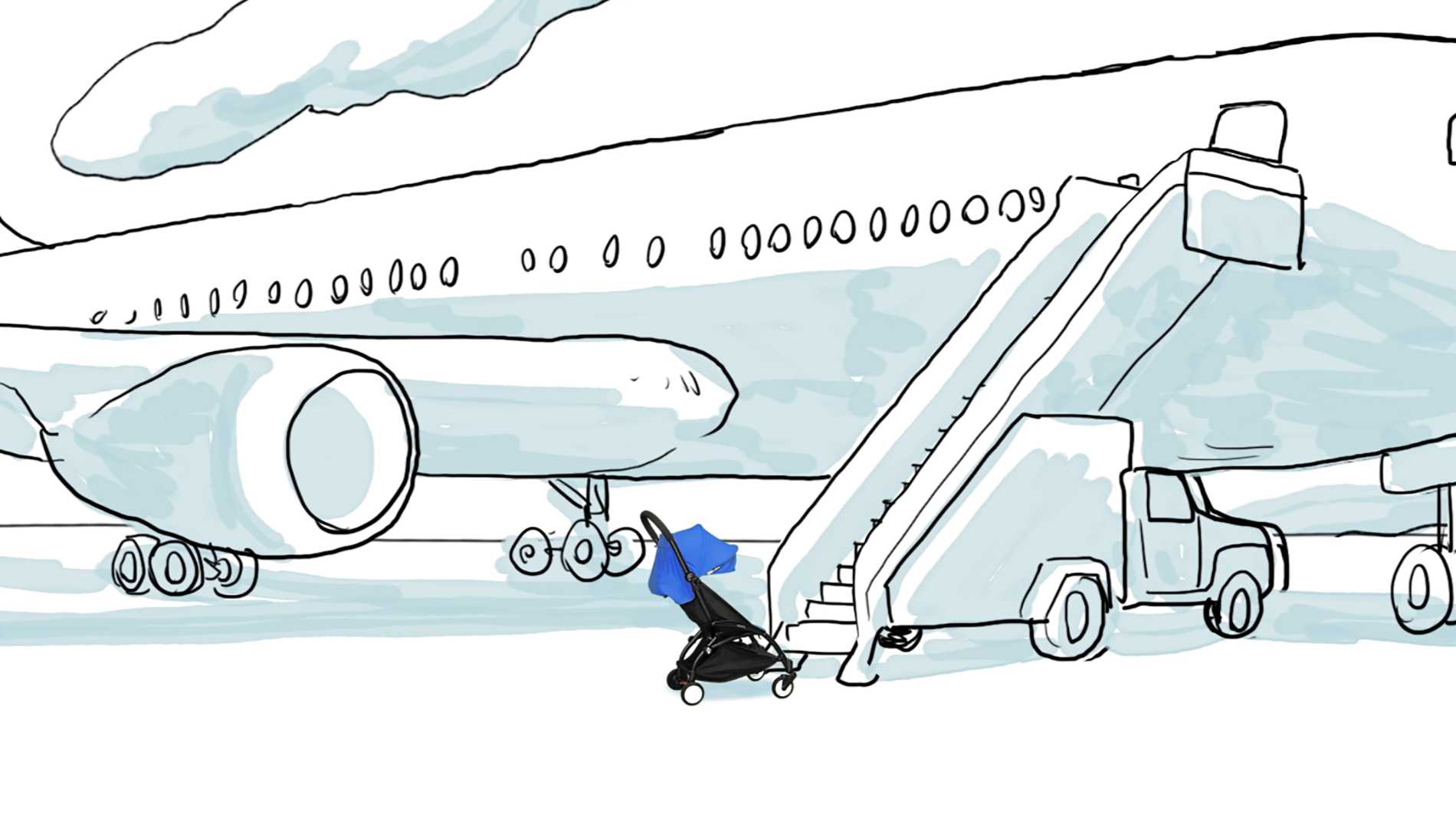 I always pack puffy stickers for Emma, it doesn’t take space and can kill a precious 15min. She can stick them anywhere: to decorate an empty water bottle, on the airline’s magazine… One of her favorite thing to do is shredding paper so I let her make a mess with the paper bags and tissues.

I always pack a new toy or something they are not usually allowed to, that is small and easy to play with while sitting (a new car, a fake mobile phone, a small pouch containing finger puppets, band aids, bubble wrap paper, an old set of keys, a old wallet with fake cards…)

I usually also pack a book, either an activity book (I love these) or books that provides lots of content (Richard Scarry’s books are great)

What to pack in your hand luggage:

Have everything organized in separate pouches (ex: one bag for clothes, one bag for snacks…) so you don’t have to go through the entire bag every time you want to get something. I use a lot of Ziplogs whenever I travel.

Traveling with little kids internationally is exhausting and the flight is only one part of it. Once you’ll arrive, you’ll face jetlag. A good rule of thumb is to expect 1 day to adjust for each hour of jetlag but it’s usually much quicker to adjust when traveling from east to west and more difficult the other way around (we usually adjust within 1 day when going back to France but it takes us 5 days the other way around) so don’t forget to take that into consideration when planning a trip.